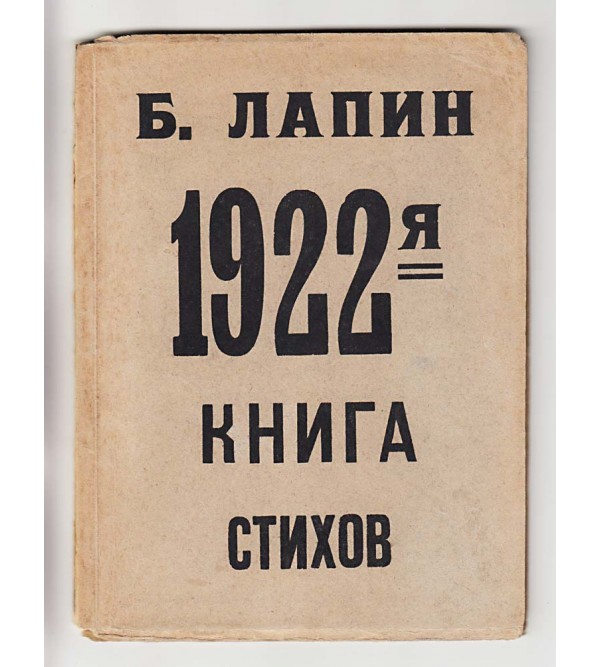 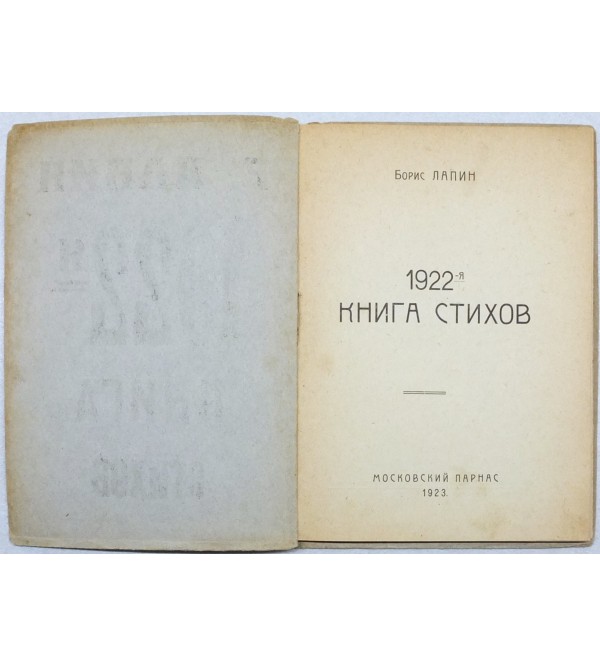 Boris Lapin (1905-1941) started his career as one of the most promising proponents of Expressionism in Russian literature. Initially affiliated to the Centrifuga group, then organized his own Moskovskij Parnas (The Parnassus of Moscow, 1922-1925), whose participants embodied the ideas of leading Centrifuga poets, futurists and German expressionists. The group published two issues of the miscellany with the same name (no. 1 never went on sale), which included works by young Moscow expressionists along with the mature members of Centrifuga, as well as translations of German expressionist poetry. Moskovskij Parnas also published Lapin’s first book of verse “Molnijanin” (the Son of Lightning, 1922) and his second, the most substantial achievement of Russian expressionist writing, titled "1922-ya kniga stikhov" (1922-th Book of Poems, 1923), in which he linked influences from Russian and German romanticism with contemporary trends in poetry such as Khlebnikov neologisms and expressionist ideas. The prevalent impression of Lapin’s forty-seven poems comprising the collection is that of strangeness, which originates mainly from the fact that the romantic content is presented in the avant-garde garb. There are irrelevant epithets as well as a general predilection for the absurd, the reverse and paradoxes, and a tendency for mixing everything. Lexically, Lapin’s poetry is a curious cocktail of various names, coarse words, technical terms, foreign words, and neologisms. The book ends with an envoy in prose addressed to Yevgeny Gabrilovich, which contains some Expressionist ideas, through the word “Expressionism” is never used. Brjusov in his review admitted that Lapin was gifted “newcomer who succeed not to become an imitator”, but chided him for affectation, tortuous imagery, “desperate” metaphors, childish distortion of language, and obscurity, but “through lacking maturity it showed originality and great potentialities.” By this book Lapin’s expressionist phase was over and in the second half of 1920s he joined group Literaturnyi Centr Konstruktivistov (Literary Centre of Constructivists). In 1930s he pursued a career as a travel journalist and war correspondent.