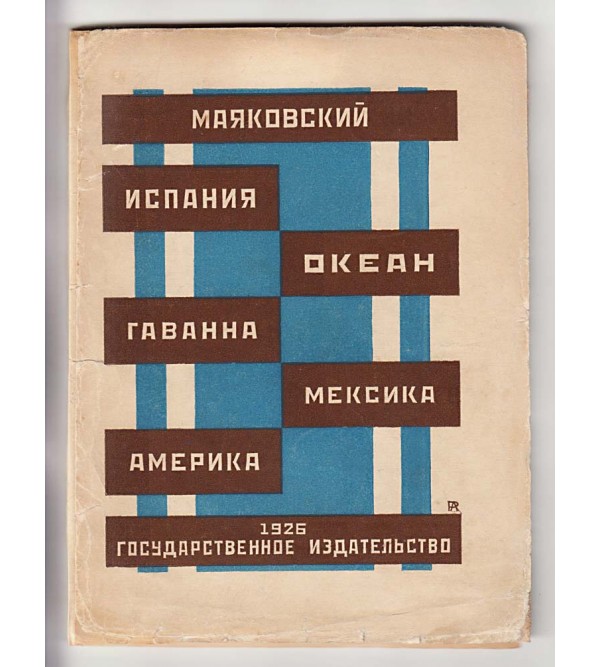 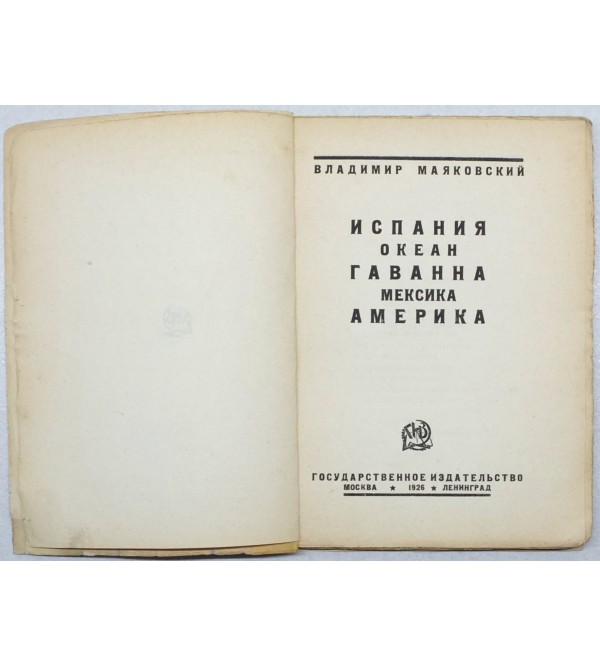 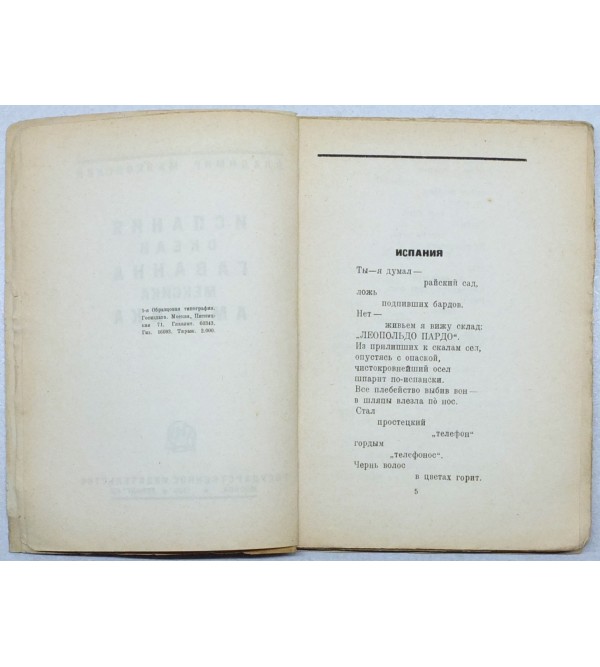 Condition: Good. Replaced spine, repaired lower half of the back wrapper and the upper half shows slight staining, creases across corners of the front cover, bottom edge of the front cover shows slight fraying; internally near fine, with few occasional foxing spots and fingerprints on the bottom outer corner of the fly-leaf.

In 1925 Mayakovsky had embarked on a longest his journey on the transatlantic liner to the Northern American continent. First he went to Cuba and then on to Mexico, where he met the modernist artist Diego Rivera, a communist. Mayakovsky then spent three months in the U.S. visiting New York, Chicago, Detroit, Philadelphia, Pittsburg and Cleveland, giving lectures and poetry recitals to workers and figures from the art world. He was captivated by U.S. technical prowess. He described his impressions of the journey in publicistic prose  "My discovery of America" and in collection of poems “Spain, the Ocean, Havana, Mexico, America”. He helped to provide Soviet citizens with a contemporary and varied picture of life and culture of the visited countries in the mid-1920s and his views were more influential than anyone else’s because of his prominence.

Book's constructivist cover design by Aleksander Rodchenko (1891-1956), the founding member of Russian Constructivism, artist, designer and photographer. Rodchenko advocated for the integration of art into everyday life; he focused on graphic design, producing propaganda posters and advertisements. Later in his career Rodchenko became impressed with the photomontage of the German Dadaists and made great achievements producing his own experiments in this field. From 1923 to 1928 Rodchenko collaborated closely with Mayakovsky on the design and layout of LEF and and Novy LEF, also designed numerous of poet's books mainly in the constructivist manner and through the medium of photomontage. Vladimir Mayakovsky (1893–1930) was prominent figure of the Russian Futurist movement, and the leading poet of the Russian Revolution. Over the years, he was considered the Soviet poet par excellence, who lent his enormous talents to further the propaganda needs of the Soviet regime. While he was associated with the futurists, he quickly developed his own unique style. Mayakovsky loved to break conventions in life and in poetry. He used free verse, unlike most Russian poetry, and created unusual rhymes and jarring images. His work was often upsetting, over the top, yet brilliant at the same time.